1G.M. Dobrov Institute for Scientific and Technological Potential and Science History Studies of the NAS of Ukraine

Abstract: The article is devoted to the problem of gender parity of researchers in the context of international gender standards and policies to promote the effective use of the country’s intellectual resources adopted by Ukraine. The international documents of the United Nations, OECD and other organizations related to gender issues in the scientific sphere are analyzed. The main gender characteristics of the Ukrainian R&D personnel are revealed using statistical data of the State Statistics Service of Ukraine on gender distribution of R&D personnel in Ukraine, by education level, 2016; change in the number of researchers and women researchers in Ukraine in 2006— 2015; gender distribution of Ukrainian researchers by discipline in 2015; share of women researchers by scientific degree and discipline in 2015, % of the total researchers; share of women researchers with Candidate of Science and Doctor of Science degree by sector of activity in 2016, % of the total scientific degrees holders in the sectors.

The level of women’s participation in R&D is high (46.3 %) compared to other countries, but horizontal and vertical gender segregations were revealed. Women researchers tend to be underrepresented in physical and mathematical (28.2 %) and technical sciences (37.4 %). The proportion of women in Doctor of Science holders (25/3 %) is much less than that in the categories of researchers and Candidates of Science. Larger shares of women are awarded Doctor of Science degree in traditionally “female” disciplines like psychology (60.6 % women in the total of Doctor of Sciences holders), pedagogy (59.1 %), art criticism (56.3 %), sociology (52.6 %), geography (50.0 %), physical training and sports (50.0 %), social sciences (45.2 %), compared to 9.7 % of female Doctor of Science holders in physical and mathematical sciences, or 12.4 % in technical sciences, or 16.9 % in chemical sciences.

This circumstance is argued to negatively affect the achievement of gender parity in the management of scientific teams and gendered policy decisions in research and development system. It is concluded that the feminization of science in Ukraine, which was observed in recent decades, should not be viewed unambiguously as a positive trend. The increased number of female researchers is a consequence of the deterioration in the financial support of R&D, the reduction of the prestige of R&D jobs and the outflow of male researchers’ talent. Gendersensitive science policy should consider the problem of vertical and horizontal segregation in science; create more favorable conditions for the career development of talented female researchers for the benefit of science and innovation, but not at the expense of the scientific activities of male researchers. 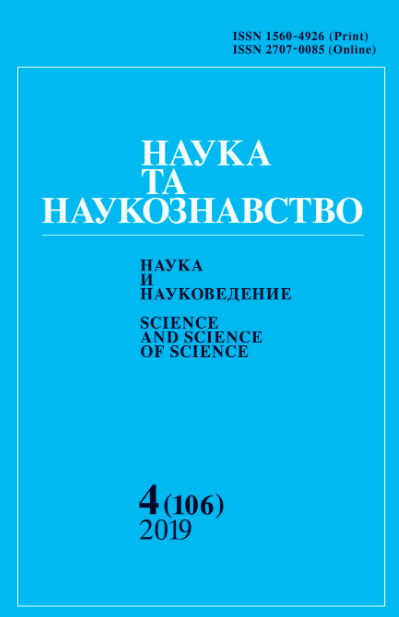